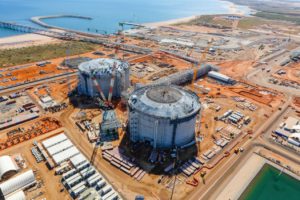 Alan Mills, President of Falcon Global commented on the milestone achieved in the Wheatstone project

It took all of 5 years, which is not unusual for such large mega projects, but Wheatstone eventually got there, producing its first shipment of LNG. Falcon’s involvement on the project was with the upstream offshore production facilities, not the downstream LNG plant.  Falcon are very proud of our involvement in helping bring Wheatstone to this major milestone and a step nearer to completion.  Zenator has contributed to the outstanding success of this landmark project. We continuously monitored all activities through design through construction and commissioning to final handover, ensuring the facility was safe, verified with no bottlenecks or built in faults.

SAN RAMON, California — Chevron Corp. has started producing liquefied natural gas (LNG) at the Wheatstone project in Western Australia. The first cargo is on track to be shipped in the coming weeks.

At full capacity, the Wheatstone project’s two train LNG facility will supply 8.9 million metric tons/year of LNG for export to customers in Asia.

The LNG facility is located 7.5 mi (12 km) west of Onslow and processes natural gas from the Chevron-operated Wheatstone and Iago fields.

Chevron holds an 80.2% interest in the offshore licenses containing the Wheatstone and Iago fields.